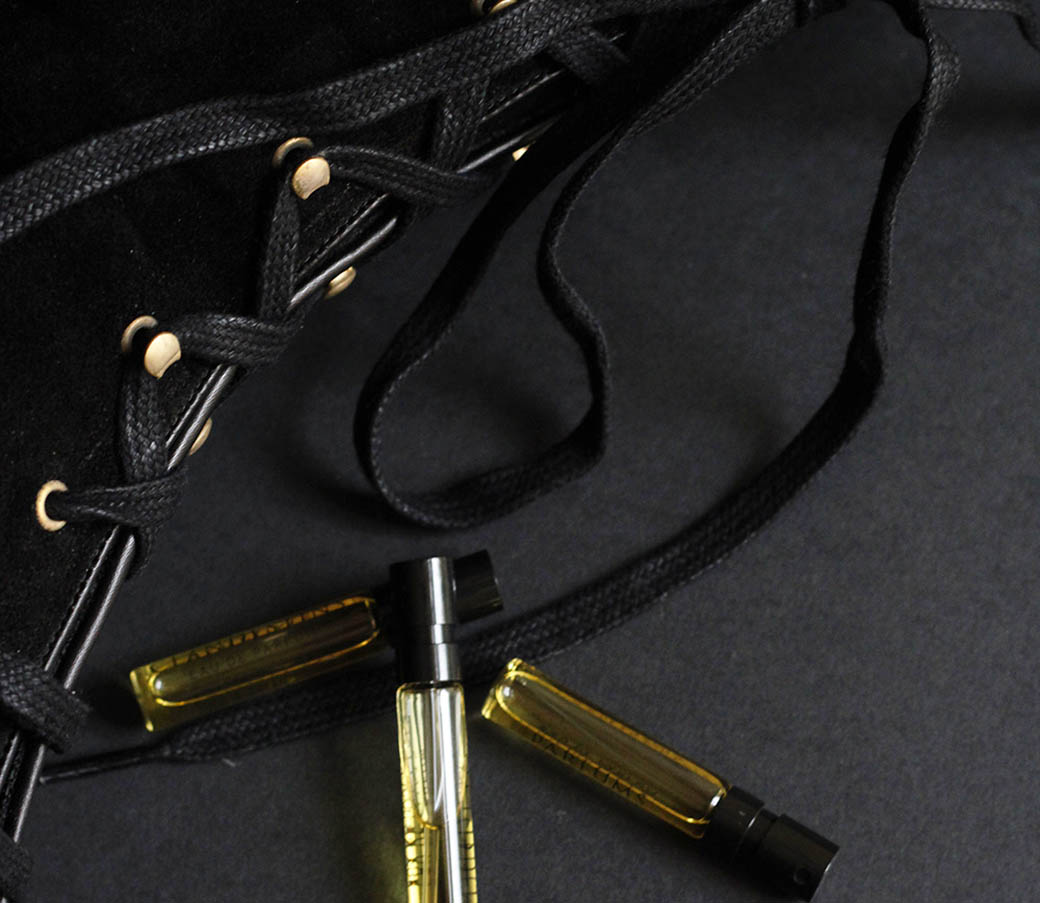 Perfume and leather have a notorious yet illustrious shared history well before the rise of leather perfumes as a fragrance genre. The two master arts and crafts were hand in glove before modern perfumery even became a distinct industry.

This is an appropriate metaphor given the 16th century Florentine noblewoman Caterina de Medici’s famed love of perfumed gloves for herself. And, allegedly, as poisoned gifts to those who she suspected of thwarting her Machiavellian plans as Queen Consort of France.

Then there is the epic appearance of perfume and its leather associations in Patrick Suskind’s novel Perfume: the Story of a Murderer. Grenouille (‘frog’), the underling and underworld perfumer-protagonist of the novel starts life in the filth and stench of 18th century Parisian streets, among the offal from markets and the effluvia flowing from the abattoirs.

Strange but true, French perfumery’s origins stem from scenes like this with a detour by way of Italy and southern France.

Caterina de Medici, who went on to raise three kings of France, was said to have introduced perfumery to the French court when she arrived from Tuscany to marry the Henry, Duc d’Orleans, brother to King Frances. She brought along her favoured, personal perfumer Renato Bianco (René le Florentin) and helped cultivated a lust for perfumed products among the aristocracy.

Today, the town of Grasse in Provence is distinguished as the home of French perfume industry. It lies among terrain which has a climate and soil favourable for the growing of perfumery’s most prized flowers: jasmine, tuberose and rose. However, Grasse has a less sweet-smelling past.

In the 17th century, the town and its rival Montpellier were the epicentres of tanning, which used urine, dung and other mightily unpleasant liquids to cure the hides. Leather is cured in some parts of the world, such as in tanneries in India and Morocco, in much the same traditional way today.

Spurred on by an increasing demand for perfume to mask the animalic smell of raw, cured leather, Grasse, thanks to its flower-loving terrain, developed as the centre of perfume, leaving Montpellier as the home of the tanning industry.

Moving on from its base origins, we enter a so-called Golden Age of perfumed leather goods which itself gave rise to the genre of leather perfumes we know so well today.

Once perfumed leatherware had assuaged the sensitive noses of the aristocracy, a royal among royals is thought to have given rise to the first perfume imbued with the scent of leather; rather than vice versa, leather scented with perfume. King George III (know as ‘mad’ King George) commissioned his perfume from the house Creed of London, a glove maker. He requested a perfume that exuded the scent of his leather riding boots. It was Creed’s first fragrance.

Creed conjured up a proprietary blend for his Highness composed of citrus, sandalwood, ambergris, sandalwood and leather notes. Wonderfully, Creed’s ‘Royal English Leather’ fragrance lives on today and is much loved. It is a direct descendant of those early leather-fragrancing scents, but more refined and wisely so as we’ll now find out.

The typical scent blend to perfume leather as it left the tanneries was composed of rose, neroli, sandalwood, lavender, verbena, bergamot, clove and cinnamon oil, as well as civet and musk. The mix varied according to tannery, and those blends focusing on citrus and herbs with a dash of civet for good measure were cheaper and more easily available to the tanneries in the South of France.

For near on two hundred years, a leather perfume called Peau d’Espagne was popular. It evolved from those tanning perfumes to become a ubiquitous leather fragrance. So common was it that it ended up being known by the mid 1800s as the all-pervading perfume worn by the lower echelons and ladies of the night. Downgraded and commonplace, Peau d’Espagne rang the death knell for leather perfumes.

Both scented leather and leather scents lingered on half-heartedly in the guise of Peau d’Espagne which continued to be made. Renowned apothecary and herbalist Santa Maria Novella launched their version of Peau d’Espagne in 1911.

But by the late 1800s with the advance of chemistry and the advent of synthetic aroma molecules and isolates, the perfumer was unshackled from naturals and could dive into creating fantasy accords. Although somewhat slow to get going, synthetic perfumery was never going to falter. We find the first imaginary fragrances born, such as Houbigant’s Fougère Royale (royal fern) which included coumarin, an isolate from the tonka bean, and which was to spawn the fougere fragrance family.

Leather perfumes that harked back to the dark age of filth and gutter, however improved their formulas, fell out of favour for a good part of the mid to late 1800s, although Creed’s royal seal kept their breed of leather fragrance going.

Finally though, leather perfumes were to be revived once they had lost for good their tannery connotations and were associated instead with the glamour of polished saddle and boot.

The 1800s were a century of daring and disastrous military expeditions not least in Russia and the Caucuses. With Paris seeing an influx of Russian aristocrats and artists as émigrés after the Russian Revolution, it wasn’t long before Russia, leather and the arts – including perfumery – became an attractive mix. There was something exotic and alluring about leather perfumes in way the genre had never been before.

Early 20th Century: Leather in Vogue thanks to The Charleston & Chanel

The post-WWI decades ushered in the first real vestiges of women’s emancipation. The 1920s saw women literally wearing the pants and adopting manly pursuits, taking up smoking and even the most daring of male sports – early aviation.

From leather flying jackets to smoke-filled men’s clubs with Chesterfield sofas and walls adorned with hunting, shooting and fishing memorabilia, male fashions and man sheds of the day were now in women’s sights. What could be more decadent and liberating than a woman openly adopting the leather-infused domain of men?

It is no coincidence, since perfume follows fashion and cultural mores, that leather fragrances were revived post war. This time, they entered the market in a new guise under the helm of the haute couture fashion houses. Cuir de Russie by Chanel came out in 1924 while the ultimate smoking perfume for women was Caron’s Tabac Blond of 1919. Many perfume houses went on to create their own Cuir de Russie versions. But who doesn’t recall seeing an image of the eponymous Madame Chanel with cigarette holder in hand?

This period until around the mid 1950s was the heyday for leather perfumes, and arguably today, leather still is up there with the greats and never far from favour. Each perfume house has a leather fragrance or two in its stable, if crossed with other genres such as Chypres or flowered up.

Leather in name might not be an authentic leatherware scent to wear. But, who cares? We don’t really wish to return to Peau d’Espagne days. Fantasy leathers are what we crave. It is beyond this potted history to go up to the leather as fetish perfumery genre of the ’80s, but suffice to say, leather will always be with us morphing along with cultural moods. We all love a good yarn and backstory and leather is up there as perfume’s most ancient and enduring of scent families.

Leather perfumes may wane from time to time, but they endure as perfumery’s long, unrequited love affair.

At Parfums Clandestins, we have three eaux de parfum with leather notes in varying degree.

Eresia EDP, is a smouldering, aromatic blond wood perfume including leather notes of guaiacwood, oud, Peru balsam and Virginia tobacco with a blast of bergamot in the top.

Illecito EDP, launching end 2020, is the true leather perfume in our stable. It will showcase labdanum, birch tar, a darker oud, along with coffee, cassie and musk.

There has been a problem with your Instagram Feed.
Parfums Clandestins