Perfume ingredients are rarely ever listed on the label or packaging of the fragrance you buy. That may seem strange, but it’s true, even in these days of tight regulation of cosmetics’ markets. Whether you are buying perfume in the EU or USA, and indeed most other jurisdictions with thorough regulatory authorities overseeing cosmetics sold to the public, you will barely find a label that states what the perfume ingredients actually are.

After all, there are few perfumery houses, from big brand names to niche, artisan perfumers who would wish to state explicitly the secrets of their blends. Clearly, a list is not the percentage formula, but still, fragrance houses don’t wish to make things too obvious to consumers, nor more likely to potential competitors. That said, the moment a big-hitting new release perfume is launched, rival firms will use methods like gas chromatography mass spectometery to analyse the fragrance and decipher quite accurately the materials and amounts.

Does anyone list perfume ingredients; and if so why?

Some perfumers, often those working with natural and botanical materials, wish to list all formula ingredients for the sake of transparency. I can think of four brands that do this, of which two are creating natural fragrances. Their aim is not only to ensure consumers with allergies or skin sensitivities can avoid ingredients that trigger their reactions. They also help the perfume-buying public avoid ingredients they simply do not like. You may have, for example, a particular hatred of a macrocyclic musk such as ambrettolide, whether natural or synthetic, or not like a brand name ingredient such as Habanolide, a musk that has a distinct metallic note and which is made by chemical giant Firmenich.

These are just some good reasons for perfume manufacturers to declare all ingredients just as the rest of the cosmetics’ industry must on its products. For now though, perfume ingredients are still closely guarded under the catch-all word ‘parfums’ or ‘fragrance’ in the small print.

Perfume notes are often listed in the marketing verbiage, but these need not tally with the raw materials used and can be fantasy notes such as ‘white musk’. And who know for sure what is meant by ‘amber’? This can vary according to each perfumer’s special blend and is wide open for interpretation. Amber can range from more akin to ambergris, the elusive, mild scent of sea-weathered ‘excreta’ (for want of a better word) from a sperm whale, to warming, resinous scents in accords based on labdanum, vanilla, cistus, Peru balsam and so on.

What are those chemicals listed on Perfume?

Perfume ingredients are even more elusive and impenetrable to understand than note nomenclatures. If you do read the small print, you will find quite a long, micro-sized font list of chemical names on your fragrance carton. Usually, this list is headed by ‘Alcohol (denat)’, followed by ‘Parfums’ (fragrance), and Water (aqua). These are listed in order of volume.

Alcohol-based perfumes like Colognes, Eau de Toilette, Eau de Parfum, Parfums and Extrait de Parfum will all have more alcohol than fragrance concentrate. Even extraits have between 20-40% fragrance blend; any more and they would likely not be compliant with EU and IFRA regulations – more on those below – on the percentage of allergens allowed in perfumed, leave-on cosmetics’ products. Mention of allergens brings us nicely to the rest of the list and what lies behind it.

How the fragrance industry self regulates to keep its secrets

The perfume industry, in efforts to avoid the day dawning when it has to list each perfume ingredient not just an ever-increasing list of constituent chemical allergens and sensitizers, relies on its self-regulatory body – IFRA (the International Fragrance Association).

IFRA promotes responsible fragrance manufacture that protects consumers and the environment through its standards and code of practice. Fragrance manufacturers, whether single artisan producers or chemical firm giants (who comprise most of IFRA’s members) abide by IFRA’s codes and standards in order to avoid greater, enforced regulation on their business.

IFRA, to ensure this more hands-off approach to its members – and others like Parfums Clandestins, continues to update its standards and codes in line with the findings of rigorous scientific research into fragrance ingredients. In fact, it has just issued its long-awaited 49th amendment which has seen some ingredients more restricted (and a few less so) and certain categories of fragrance use in cosmetics change.

Manufacturers in or selling to EU markets must also abide by the European Union’s cosmetics directive, which lists some 26 allergens that can be found in fragrance and other cosmetics’ ingredients and which must be declared on the consumer-facing, primary packaging at the point of sale. The EU Directive does not specifically call the 26 chemicals ‘allergens’ but they are singled out for their allergenic potential as assessed through lab and evidence-based scientific research.

As I write this post (early February, 2020), the EU Commission is about to close submissions for opinions on proposals to increase the allergen list, and in effect unbundle more allergens and some ingredients from the single words ‘parfums’, ‘aroma’ or ‘fragrance’ which are currently allowed but which mask the components of a fragrance blend in that INCI / ingredients’ list. I will update this post with the outcome.

As you suspect, the trend is for greater transparency coupled with tighter regulation, which most in the perfumery industry wish to avoid, hence the clout of IFRA’s work.

It is possible for perfumers to ignore IFRA’s codes and standards, as well as EU regulations. If a perfumer is making bespoke fragrances for a private client and informs them that a certain perfume is not IFRA compliant, and the client agrees to trial or buy it (ideally patch testing first), then no harm is done.

I know of perfumers who go out of their way to state their creations are non-compliant with IFRA, and sell commercially to any customers anyway. This may be possible, and not illegal depending on the cosmetics’ jurisdiction, but a wise perfumer would not risk a law suit arising from a consumer having an adverse reaction to their creations.

Safety testing and the provision of safety data sheets and certificates of analysis can prove that a perfume is compliant with IFRA and EU regulations and would make a perfume house’s case stronger in arguing there was no negligence on their part.

If a cosmetic is sold in the EU it has to be compliant by law with the EU Cosmetics’ Directive regulations on allergens and other aspects of cosmetics’ production and placing on the market – no ifs nor buts. 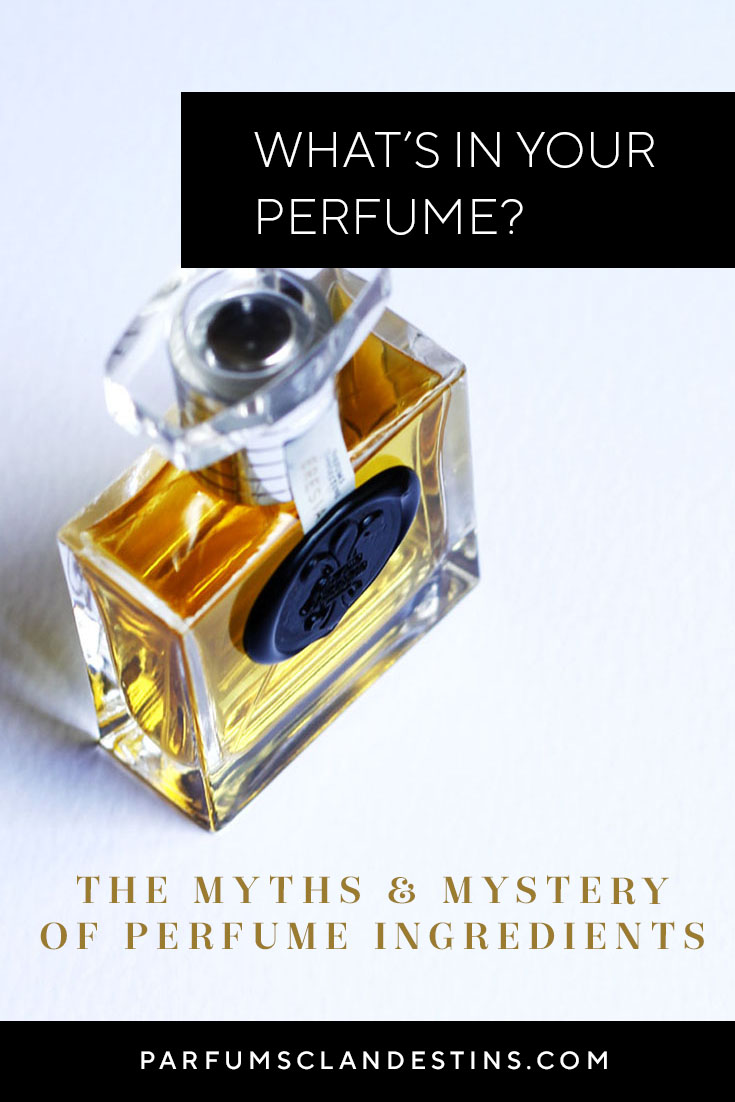 Back to the rest of the ingredients list: what are those complicated chemical names that appear after water (aqua)? They are the allergens, and while having chemical names, they can be derived from natural sources or be nature-identical synthetic ingredients, or synthetically-created aromachemicals that have no mirror botanical in nature.

Let’s state the obvious: everything is composed of chemicals; organic, natural botanicals as well as individual aromachemical molecules are all composed of chemicals. Chemicals legally used in cosmetics in the EU aren’t ‘nasties’ whatever their origins. Some constituent chemicals of quite common botanicals are singled out for regulation and limits as they may cause allergenic reactions or skin sensitivities in some people.

Let’s look at some of the most common chemicals the EU requires mandatory listing of and IFRA requires responsible listing of as constituents of perfume ingredients. This is a mixed EU/IFRA list and most mentioned can be both nature derived and synthetically created.

Do refer to the EU full allergens’ list and IFRA standards library for others and full information on the restrictions and allowed limits in fine fragrance (IFRA category 4).

I will leave the issue of so-called ‘banned’ or all but banned materials like oakmoss, that mainstay ingredient in the Chypre-family perfumes, for another post. I think it’s best not to muddle our ingredients’ list deciphering with a debate about the merits or not of IFRA and the EU’s heavy restrictions on some of perfumery’s most beloved, traditional ingredients.

As you can see, the perfumer and their safety assessor must do a lot of maths to work out the percentages of the restricted sensitizers and allergens in each material to ensure IFRA limits are respected when the perfume is diluted to its require strength.

If more chemicals and ingredients are added to those perfume ingredients that require listing on packaging, the perfumer (or number crunchers in big fragrance houses) have a lot more work to do. However, I do believe the trend favours the consumer for all the right reasons; those of transparency and safety. For the most part, perfume formulas can be deciphered anyway, so that’s no argument to halt more chemicals on the listings.

What might stop the move is a simple practicality: how do we get all that wording on a small perfume carton? The EU has already said it favours the arrival of the e-label as a solution. Where perfume is sold, an internet connection and customer web access terminal must be in situ. Now, that’s not hard to do, is it?

Parfums Clandestins will be listing all its ingredients currently hidden as ‘Parfum’ by the end of February 2020.

Photo by Joanna Kosinska on Unsplash

There has been a problem with your Instagram Feed.
Parfums Clandestins