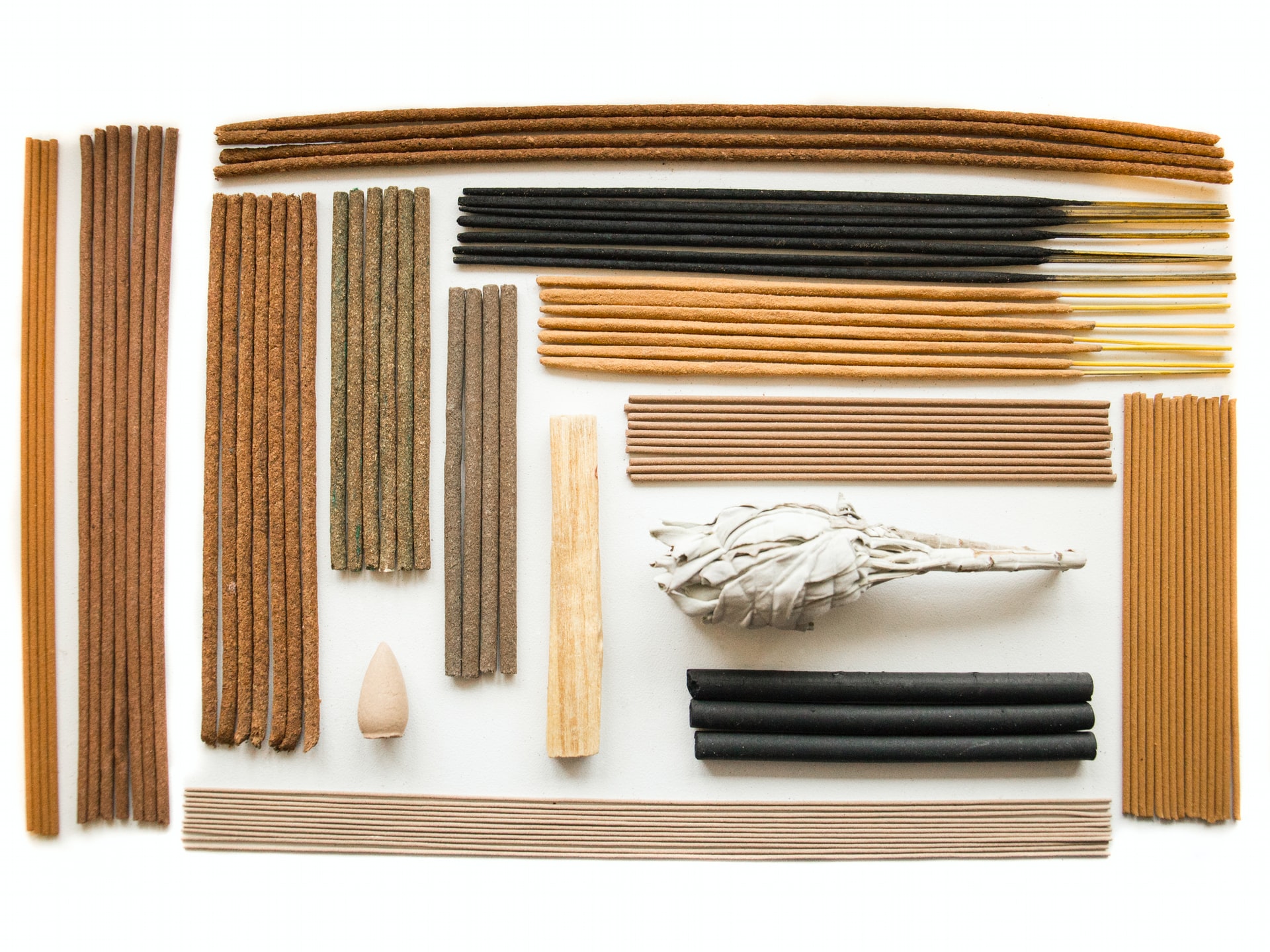 Smudging has finally wafted over the Pond to Europe. Is it a mystical ritualistic way to cleanse our home spaces, or simply a buzz practice that sounds sexier than spring cleaning? Before I tackle that, let’s define smudging:

Smudging is an ancient ritualistic practice of burning sacred woods, herbs, resins and balsams to ‘cleanse’ spaces and/or purify the body, mind and spirit.

The ritual burning of sacred materials is a practice millennial old, and one carried out in almost all cultures. It has been an inherent in cultures as diverse as indigenous American peoples, and the ancient Greeks, Romans, Minoans and Egyptians and is carried on in current-day religious practices.

The term smudging should be used solely to refer to the practices of native American sacred ceremonies but it is now used more liberally as the trend for smudging and smudging ingredients has become popular. You can thank commercial interests and opportunities for bringing it from native American rituals to Californian dreamers to more mainstream America and now on to Europe. 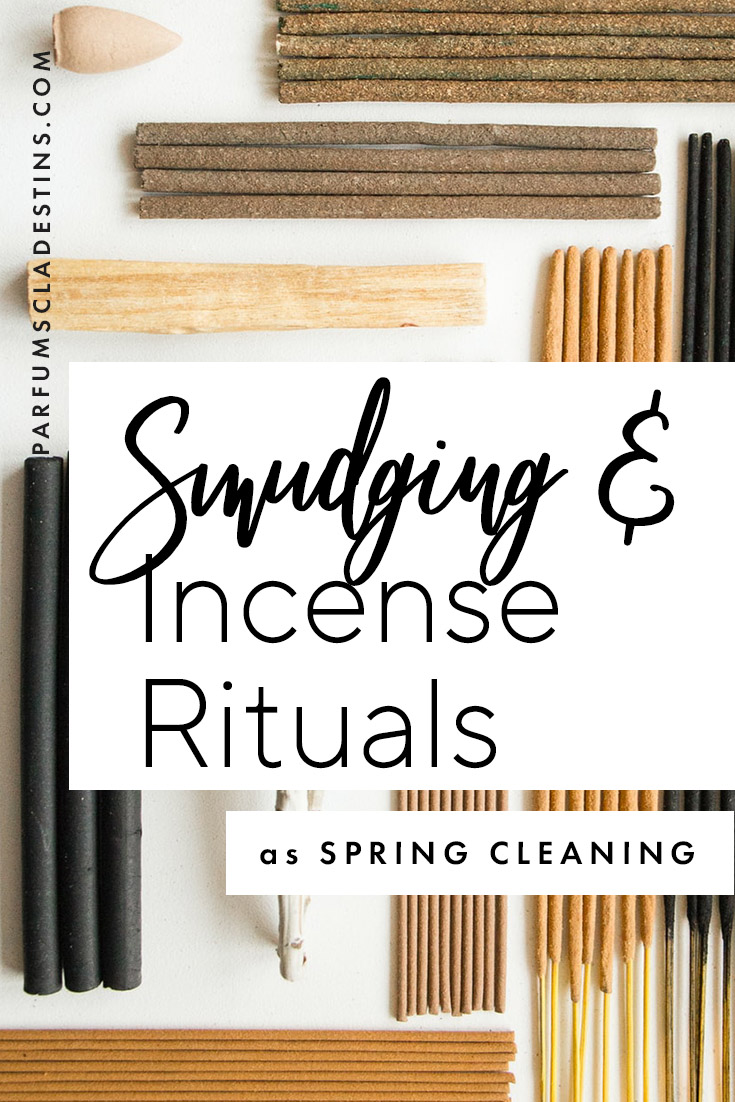 That mystic, ritualistic and religious practices should use smoke to cleanse is well documented and not just by Feng Shui practitioners who extol its role in cleansing spaces of negative energy. As renowned natural perfumer Mandy Aftel says in her book Essence & Alchemy, “The oldest role of scent, predating its use as a cosmetic, is as a vehicle to the realm of the spirit. And why not! Smell has always been recognized as the most ethereal of senses”.

Aftel comments that the use of aromatics in religious rites “…lies at the heart of religious practices in nearly every religion, sect and nationality”. The shaman, priest or tribal leader who held sway would use smoke to visually portray intercession with higher deities. The smoke rising upwards would be our earthling mode of communication with celestial beings.

It also provided a cloak to shroud the practices of those carrying out the ritual burning or incense swinging. Only a few were granted access to the sacred incense, herbs and woods. The smoke helped them hold mystical sway over their congregations, audiences and communities. In a similar vein, royalty would be annointed; the act, and the oils used both seen as tools bestowing spiritual powers to seal their divine right to rule.

The word ‘perfume’ comes from the Latin per fumum, which translates as ‘by means of, or through smoke’. The linkages then between religions and the ritual burning of incense is literal. We shroud ourselves in scent to create an aura about us and to send out certain signals to those who breathe in our perfume as we pass. There is no getting away from the fact perfume has sensual, psychological influence over us and is a direct descendant of the aromatic smoke that rose in those ancient sacred, perfumed rituals and is still present in religious rites today.

What aromatics are used in Smudging?

Taking cues from the native American practice, typical smudging bundles use grey sage – often mistakenly called white sage – and red cedarwood, along with related herbs like artemsia and lavender. Palo Santo is popular and was the sacred wood used by native Americans and Mexicans. It is similar to cedar and has the same medicinal scent when burned. I say ‘bundle’, as if you go online to search for smudging aromatics you will find them bundled for ease of use, or alternatively in chips (like a pot pourri) for burning in a fire-proof receptacle.

As you’d expect, resins and balsams used since ancient times are common in today’s smudging kits. Myrrh, Frankincense and a similar resin, Copal, which comes from a Mexican tree and smudging tradition are often included in smudging kits, along with balsam fir, sweetgrass and bayberry. The pot pourri of smudging herbs and resins is not as hard and fast as it would have been for the ancients. Sometimes, kits include a feather to assist in wafting the rising smoke.

The Significance & Science of Smudging

While we can fathom the ancients’ ritual smudging, burning of resins or incense swinging, what do we make of the smudging trend now? Is it in any way possible to claim that it removes bad spirits and ushers in fortune to our homes, or clears our state of mind?

First, I think it’s important to say that the smudging ritual had deep spiritual meaning for ancient cultures and still does today for native American peoples who practice it. That smudging is now entering the more mainstream vernacular and cropping up in wellness, mindfulness and well-being circles could be called cultural misappropriation. This is certainly how some native Americans would view the growing trend of smudging, and its extension into wider society as well as it commercialisation. Smudging has certainly hit the holistic world if Goop has covered it and you can now ‘shop the energy clearing kit‘.

Secondly, the burning of certain aromatic herbs has been done for centuries to ‘cleanse’ spaces as Patricia Davis writes in her seminal book ‘Aromatherapy, An A-Z‘: “The use of holy or magic smoke, in the form of incense, has survived in almost all major religions, both East and West, and the use of aromatic plants remained standard medical practice right up to the present century (20th). For example, French hospitals burnt thyme and rosemary in the wards as a disinfectant”.

The burning of aromatics is therefore not to be written off as a hippy revivalist practice and merely a more trendy step up from the Joss stick days of the ’70s, particularly if we are using aromatics known for their astringent, therapeutic and medicinal properties. I can quite see myself, scent lover and creator that I am, burning something scented to refresh a room and therefore unburden my mind. It may well form part of my deep house clean this spring.

However, smudging is, to my slightly cynical mind something that has been (mis)appropriated for marketing purposes and aimed squarely at those in the wellness and well-being sectors. Why not let the native Americans keep it for themselves rather than appropriating it to sell products like smudging bundles, scented candles, room sprays and so on?

Don’t me wrong, I too feel a strong linkage to ancient practices when I am creating perfumes. I love the frisson of excitement I feel and the sense of collusion that comes over me. Am I in cahoots with those alchemists of centuries past? In my mind, yes, for sure! But, I am wary of jumping on marketing bandwagons and would prefer to leave certain practices to perfume history and the times they were meant for and born into.

Perhaps I’ll call my version of it spring cleaning while still respecting the values and beliefs of all those who practice it, whether led by ancient ritual or for modern-day holistic and wellness reasons.

Photo by Petr Sidorov on Unsplash

Sussurri, meaning whisperings in Italian, in its m

Four golden flacons, all in a row. A first time ou

So thrilled to see Parfums Clandestins in a cameo

I just returned from an early swim and how I'd lov

Malta opened its borders yesterday. It was strange

What happened to June? It sped past so fast, but t